Ann finds support when needed most

Teachers and students get behind 'Me No Hair Day'

A long-time teacher at John Septimus Roe Anglican Community School, Simon Brodie, first shaved his head 20 years ago as an act of support for a student who was diagnosed with cancer. He has been shaving his head every year since, alongside staff and students, who together have raised nearly $250,000 for West Australians affected by cancer. 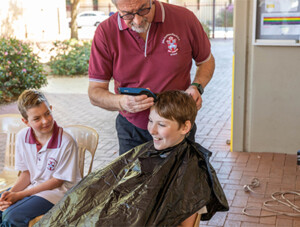 “I thought it would be a good way to show [my student who was diagnosed with cancer] that the school was behind him, so I shaved my head and it’s become a regular since then”, says Simon.

Rob Palmer, a former teacher at the Mirrabooka campus, started the initiative to get students involved in giving back to the community, by raising funds for our Do It For Cancer program; a community platform encouraging people to fundraise and support those affected by cancer in any way they like.

When Rob Palmer retired, Simon took over organising the Do It For Cancer fundraiser. For around 9 years, Simon was the only one shaving his head. In 2012 many staff and students joined, and it was titled ‘Me No Hair Day’; a large and much-anticipated annual school event.

“My annual haircut is looked forward to by many of the students, who sometimes get a go with the clippers to shave my head, or the principal comes across and does it”, said Simon.

“We have boys and girls in Year 5 starting to grow their hair in readiness for ‘Me No Hair Day’, when they’re in Year 6.”

“Each one of us who gets involved has had our lives in some way touched by cancer. Both my parents have had battles with cancer over the years.”

“Many of the students who get involved tell me stories of grandparents, parents or other people they know who have had cancer and are undergoing treatment, or who have passed away from cancer, so everybody that gets involved has a personal connection.”

Next year, the primary and secondary campuses are amalgamating, meaning secondary students can also get involved in ‘Me No Hair Day’. Simon says he’s hoping it will be bigger and better than ever before!

Simon’s advice for anyone considering signing up to start a fundraiser and ‘Do It For Cancer’ is, “jump on board. It’s really easy and there’s a whole range of things you can do to raise funds. You don’t have to shave your head; you can colour it, you can have a morning tea, there’s also Daffodil Day and many other initiatives.”

To register your fundraiser and raise vital funds for West Australians affected by cancer, visit Do It For Cancer today.