Appointed 2017Ashley Reid has over 20 years of experience in the community services sector and the public service. He occupied a senior role at MercyCare from 2001 to 2011 with responsibilities including fostering and youth services, community programs and early learning services.

In October 2011, he was appointed CEO at Ngala, a leading provider of early parenting and child health services in WA.

Ashley was a Board Director for the Western Australian Council of Social Service (WACOSS) and Community Employers WA (CEWA), is a graduate of the Australian Institute of Company Directors and, in 2019, he was awarded the Leadership WA Distinguished Fellow Award for his outstanding and enduring contribution to the Western Australian community.

Ashley maintains a strong focus on research and evidence-based services to support those most in need and brings experience of both service provision and advocacy to Cancer Council.

Ruth worked with the WA Government for 18 years as Director General of the Department of Training and Workforce Development, the Disability Services Commission and the Department for Community Development.  She was Commissioner for Public Sector Standards, the government watchdog which oversaw standards within the public sector and assisted with the appointment of government CEOs. Prior to joining government, she was CEO of the Cerebral Palsy Association of WA and Executive Officer of the Australian Council on Smoking and Health.

Ruth has held leadership positions on reviews and committees for both state and federal government.  She has experience in university governance, having been on governing councils of both Curtin and Murdoch Universities, where she was Pro Chancellor.  Ruth has a Master’s Degree and a Doctorate of Philosophy from the University of Western Australia. She is a Fellow of the Governance Institute of Australia and the Australian Institute of Company Directors, and is Chair of the National Centre for Vocational Education Research.  In November 2019, Ruth was elected as Chairperson of the Cancer Council WA Board and    CCWA’s  President.  Ruth is also a Board member of Cancer Council Australia.

Gavin is National Consulting Director for Wunderman Thompson and Managing Director of the 40 strong team in Perth. He is responsible for the strategic stewardship of the brands he works with and the ongoing development of the agency culture and team. With over 20 years in Executive roles at creative agencies, and 15 years in client-side roles, Gavin has led the evolution of businesses from advertising to creative consultancies in the communications space. Known for leading businesses with a strong talent and cultural framework, Wunderman Thompson’s success is underpinned by Gavin’s approach to building team structures that deliver outstanding results. Gavin is also a Board member of the Advertising Institute of Australia.

Paul graduated from The University of Western Australia in 1981. He trained as a Haematologist in Perth and spent two years post fellowship in the Haematology Department at the Royal Free Hospital in London working as a Research Fellow in the department of Professor Victor Hoffbrand. He was appointed as a Consultant Haematologist to Royal Perth Hospital in 1993. He was appointed as Head of Service in 2005 and continued in this position until transferring to Fiona Stanley Hospital in 2014 where he holds the posts including Co-Director of Medical and Surgical Specialties and Discipline Lead for PathWest Haematology. He continues to practice as a clinician with particular interest in haematologic malignancy and bone marrow transplantation.

Suzanne is a management executive and business leader with more than 30 years’ experience.  Her career has spanned diplomacy, corporate affairs, tertiary education and membership associations. She has an extensive background in business strategy, marketing, communications, international affairs and corporate governance.  She has lived and worked in Europe, Latin America and South East Asia, where she established the international arm of the Australian Institute of Company Directors. As a Director, Suzanne has served on both international and national Boards in the health sector, international aid development and the arts over the past 15 years.

Cheryl has over 20 years’ experience as a lawyer, specialising in employment and discrimination law, and has worked across a number of different industries such as oil and gas, retail, financial services, health, education and government.  Cheryl currently runs an employment law and investigations business, Remotely Legal.  Cheryl is also on the board of Health Support Services (part of WA Health) and chairs the People and Performance sub-committee.  In 2020, Cheryl was named Senior Lawyer of the Year by the Asian Australian Lawyers Association for her leadership, innovation and promotion of cultural diversity.  In 2019, Cheryl was named Woman Lawyer of the Year by the Women Lawyers of Western Australia for her professionalism, influence and advocacy for women.  Cheryl was also named as a leading employment and safety lawyer by Doyles’ Guide in 2020 and 2021.

Giacomo is an executive leader who specialises in technology strategy and digital transformation. His most recent roles include Manager Technical Services and Manager Technology Design & Architecture at BHP following a successful transition from the finance sector where he led the development and deployment of Online Banking Systems for Bankwest. He has 10+ years of management experience, with a strong technical and financial background, currently managing the technology design of the BHP Iron Ore production systems portfolio.

Giacomo has led cultural change and introduced key new technologies in all previous organisations as well as built and managed high-performing teams. He is proficient at navigating an always-evolving technology landscape and competing business priorities, creating the conditions for successful delivery of complex initiatives.

Tracie is an accomplished adviser and investment professional with 23 years’ experience in Investment Management, Financial Services, Accounting and Business Strategy. Currently the Investment Director of a private investment company, Tracie has founded two successful Financial Services businesses, worked in senior leadership teams and as a consultant. Through her career she has developed strong industry knowledge across a variety of sectors including finance, medical technologies and retail.

Tracie has a Bachelor of Commerce (Accounting and B Law) is a Certified Practicing Accountant and a graduate of the Australian Institute of Company Directors.  She is a member of our Finance committee, Vice chair of Perth Investment Angels, and a mentor for the CSIRO On Accelerate program. She is heavily involved in Perth’s Start-up community and has a passion for supporting innovation and mentoring future entrepreneurs.

Ruth is the Head of the Cancer Microenvironment Laboratory at the Harry Perkins Institute of Medical Research and holds a professorial appointment at the University of Western Australia. Her research group at the Perkins has a strong focus on immunotherapy and new drug design with commercial partnerships. Ruth obtained her PhD at the University of Heidelberg in 1994 and, over the last 25+ years, has conducted internationally competitive cancer research in Germany, the US and Australia. From 2008-2012, Ruth was the inaugural Cancer Council WA Research Fellow, has served for 10 years on the Cancer Council WA Research Committee and, in 2014, received the inaugural Cancer Council WA Cancer Researcher of the Year Award. She has held leadership positions in national and international research and scientific advisory committees. Ruth also serves on the Board of the Cancer Research Trust in WA.

Anna is Acting Deputy Vice Chancellor (Research) at The University of Western Australia (UWA) and has had a long career as a Medical Oncologist and cancer researcher. Since 2018, she has been the Director of the National Centre for Asbestos Related Diseases (NCARD), an NHMRC Centre for Research Excellence based at UWA and studying mesothelioma immunology, biomarkers, and translational clinical trials. The work Anna did on her own PhD more than 20 years ago, investigating the combination of immunotherapy and chemotherapy, is now reflected in the international randomised trial DREAM3R that commenced in 2021. Anna also completed a post-doctoral fellowship in clinical trials and quality of life research, giving her a unique translational perspective with expertise in laboratory science, clinical trials, and patient-rated outcomes. She was recently awarded the prestigious international award, the Wagner Medal, for her contribution to mesothelioma research, and the inaugural Martin H Tattersall Heroes award for her contribution to Medical Oncology.

Jason is a finance professional with over 25 years experience across banking, technology and resources industries. His roles in complex, heavily regulated businesses with a broad range of stakeholders has provided extensive experience in strategy, capital management; business integration and governance. Jason is the Chief Financial Officer at Australian Strategic Materials where he is responsible for finance and business development.

Michael is the Office Managing Partner of the Perth Deloitte office and has over 30 years of consulting experience across a broad range of industries. Michael specialises in large-scale organisational transformation and business process improvement.

Michael also has a passion for making an impact in the community.  He is a Director of the Wirrpanda Foundation, former Chairman of Leadership WA, and the former Chairman of Workpower Inc. Michael is a Board member of Deloitte Australia , and a Director of the Deloitte Foundation.  The Deloitte Foundation is responsible for the firm’s community programs including skilled volunteering, pro bono services, community engagement and financial assistance. 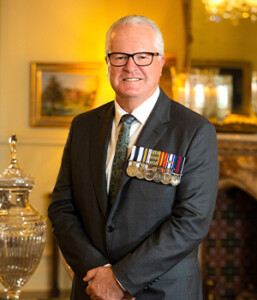 The Western Australian Governor has traditionally been the Patron of Cancer Council WA.

His Excellency the Honourable Chris Dawson APM was sworn in as the 34th Governor of Western Australia on 15 July 2022.

The Dawson family have been part of the early colonial settlers over five generations of farming and law enforcement. The Governor’s great-great-grandparents arrived in the then Swan River colony in Western Australia in 1830.

Christopher John Dawson APM was educated at Perth Modern School before joining the Western Australia Police Force in 1976, going on to provide 46 years of service in Australian law enforcement.

He served in country and metropolitan positions, criminal investigation, training and senior roles. The Queen’s Birthday Honours List in 2002 saw him awarded the Australian Police Medal for distinguished service.

He was appointed Commissioner of the Western Australia Police Force in August 2017, serving until July 2022. During the period of the COVID-19 global pandemic, Commissioner Dawson coordinated the State of Emergency and the Vaccine program.

He is married to Darrilyn Dawson, Education Consultant, with two married children and five grandchildren.