Don’t put off the chance to save your life

Sport is no place for junk food and drink marketing

We are calling on governments at all levels to protect children from unhealthy food and drink advertising, including sport sponsorship. This follows a new report finding that WA parents overwhelmingly agree that sport is no place for marketing junk food and drinks to children.

“As fans headed into the summer of 2021-22 cricket season, Cancer Council WA set out to analyse junk food branding visible during the Big Bash League final and surveyed WA parents on their thoughts on junk food sponsorship in sport,” Ms Sartori said. 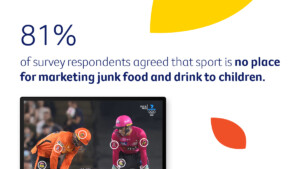 “We surveyed more than 900 West Australians to find out what they think about junk food advertising in sport, with 81 per cent agreeing that sport is no place for marketing junk food and drink to children. 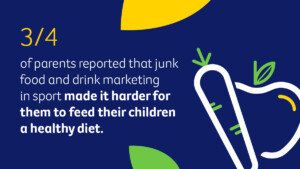 “Sport has so much potential to positively impact our health and quality of life, yet our children are bombarded with advertising from the processed food industry in every part of their lives, and sport sponsorship plays a huge part in this.”

“In terms of exposure, we found that KFC advertising was visible during 40 per cent of the final broadcast, with more than one third of this from multiple advertising exposures on screen,” she said.

“In addition, the partnership between KFC and Cricket Australia included cricket themed advertising outside of the televised coverage with social media posts, paid influencers participating in bucket challenges, themed menu items, and giving away buckets for children to wear.

“West Australian children should be able to play and watch sport in an environment that supports and promotes their wellbeing.

“Instead, watching sport means being bombarded by advertising for junk food, undermining families’ efforts to provide and promote a healthy diet.

“Cancer Council WA calls on the State Government to play its role in protecting children from this harmful exposure by creating standards on the advertising it allows on its own property, such as sport stadiums and public transport.

“It’s time for governments, sporting organisations and broadcasters to put people before profits and introduce higher standards for how the junk food industry markets and advertises its brands, especially to children.”