November is Lung Cancer Awareness Month, and 58-year-old June Williams is urging people to get any back pain checked after being diagnosed with stage 4 lung cancer in 2021, even though she has never smoked.

June lives between Mandurah and Kojonup and says her life was turned upside down after she went to the doctor for what she thought was just a ‘stitch’. 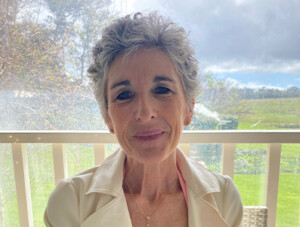 “In October 2021 we were enjoying the Toodyay races when I experienced this pain under my ribcage,” she said.

“It felt like a stitch that just wouldn’t go away. After about three days I went to see my doctor who booked me in for a CT scan.

“As I had recently had gastric surgery, I also went to see my specialist who suggested a blood test at Katanning Hospital.

“When I came home after having the blood test I collapsed with pain. My adrenal gland had ruptured, and I was flown to Fiona Stanley Hospital.”

June was given a lung cancer diagnosis and immediately began chemotherapy then later immunotherapy treatment.

“It was such a shock; I have never smoked and always taken such good care of my health,” she said.

“It can happen to anyone. If you’ve got any back pain, please get it checked out.”

Symptoms of lung cancer may include:

Our Cancer Prevention and Research Director, Melissa Ledger, says almost 100 people a month in WA are diagnosed with lung cancer and while the majority of lung cancer cases are caused by smoking it’s important to know that lung cancer can occur in people who have never smoked.

She says that lung cancer was the fifth most commonly diagnosed cancer in Australia in 2017 and the most common cause of cancer death in 2019 according to Australian Institute of Health and Welfare data.