A group of almost 130 golfers are hoping to raise $10,000 to help those affected by cancer through their annual golfing day in October, in memory of their friend, Jarrad Port, who died from cancer in 2008 aged just 32. 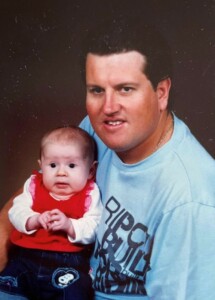 Jarrad Port and his young daughter

Ryan Vardy, organiser of the JPM Golf Day, said he is so grateful to everyone who continues to support this important event.

“The annual JPM Golf Day is a chance for Jarrad’s friends, family and colleagues to come together to remember ‘Porty’ while raising funds for Cancer Council WA,” Mr Vardy said.

Mr Vardy said in 2007 Jarrad went to the doctor with an unusual lump behind his ear but was told there was nothing to worry about.

“Unfortunately, the doctor dismissed it as a cyst, so when a biopsy was finally taken months later, it was stage 4 melanoma,” Mr Vardy said.

“He did everything he could to beat the disease including flying to Mexico for treatment, but unfortunately he passed away about 18 months after being diagnosed.

“At the time, Jarrad was married with a young daughter and another child on the way. It was just devastating for everyone.

“We used to play golf most weekends, so on the one year anniversary of his passing a group of us decided to have a game. His father Les then suggested we make it an annual event and raise money for charity at the same time.

“When we started the event in 2008, we had a group of eight. This year almost 130 will participate at Lake Joondalup Golf Resort.

“We are so thrilled everyone continues to support the JPM Golf Day to remember Jarrad and help others affected by cancer.”

“It’s only through the generosity of the community and fundraisers like Ryan and the JPM Golf Day, that we are able to do what we do,” Ms Hicks said.

“We are so grateful to all those involved in this year’s event. This money will go towards continuing to provide people who are affected by cancer with the practical and emotional support that they need during a difficult time.”