This International FASD Awareness Month, Cancer Council WA is thrilled that the powerful Alcohol.Think Again One Drink campaign, which informs and empowers the community to have alcohol-free pregnancies, is showing impressive results and making future parents think before they drink. 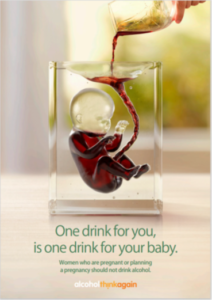 “Importantly, the research found that one-third of those surveyed reported that they decided not to drink alcohol at all while pregnant as a result of seeing the campaign.

“WA is very lucky to have the WA Government-funded Alcohol. Think Again program. It is the only long-term, evidence-based public education program that informs the community of the range of alcohol-related harms and ways to minimise risk in the country.”

The One Drink campaign was developed by the Mental Health Commission in partnership with Cancer Council WA. It informs people who are pregnant or planning a pregnancy and those around them that there is no safe amount or time to drink alcohol when pregnant, and that any amount of alcohol a mother drinks, the baby drinks too.

The campaign messages are consistent with the National Health and Medical Research Council’s Australian Guidelines to Reduce Risks from Drinking Alcohol, which advises that women who are pregnant or planning pregnancy should not drink alcohol.

September is International FASD Awareness Month; a time to recognise the importance of staying alcohol-free throughout the nine months of pregnancy.